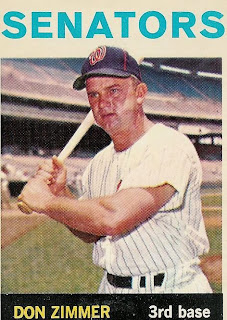 Don Zimmer shows up on card 134 of the 1964 Topps set for this edition of Senators Saturday. Looking at the picture on this card it becomes apparent where Don got his nickname "The Gerbil".

1964 was Zim's first full season with Washington since coming over from the Dodgers mid-way through 1963.

Don't let the front of Don's card fool you. Third base was the position he appeared at most in 1964 (87 games, 636 innings). However, he also showed up at second base (one game, seven innings), right field (three games, 19 innings), left field (two games, eight innings), and as catcher (two games, three innings). He was kind of a jack-of-all-trades for Washington.

Since Zimmer played most of the time at the hot corner it's only fair to consider his fielding numbers there. In his 636 innings in the field Don saw 221 chances and committed 10 errors. That gave him a fielding percentage of .955, exactly on par with the league average. Zimmer didn't quite have the range most other third sackers had though so he probably let through a few hits that might have been outs or errors on a player with more range.

While Don's offensive numbers weren't anything to write home about he did hit better than several other regulars on the Senators roster. That probably gave him more playing time than he would have otherwise had - not because he was fearsome with the lumber but because he was the best among bad options.

Young John Kennedy wasn't going to nail down third base but Zimmer wasn't the answer either. Those two were the only players to see significant time at the position. For the time being Washington was in flux at third. At 33 Zimmer was trying to prolong his career. So long as a permanent solution evaded the Senators Don would be able to evade retirement.
Posted by Spiff at 7:55 AM