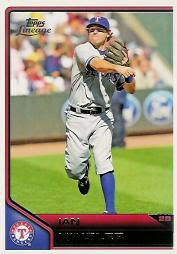 Ok, after a week of dealing with some move side effects and fighting with computers and scanners I am finally back. The computer/scanner issue is not fully resolved but I have a solution in place that enables me to do in four steps what I could do in one before. Technology rocks.

The Rangers have also been rocking. Up to 15 games over .500 with their win against Baltimore last night. Also touting the best on road record in team history at this point.

Ian Kinsler, shown here on card number 185 of the 2011 Topps Lineage set, is a big part of the reason Texas is only half a game behind Oakland in the standings. He was also a big part of last night's win.

The offense seemed to come alive last night with four Rangers having two-hit nights and an additional four getting one hit each. Leonys Martin was the only Texas player to not get a hit. Kinsler went 2-for-5 with a double and four RBI.

On the mound Derek Holland lasted 6.2 innings before giving way to the bullpen. The three runs the Orioles scored off Holland were the only three they got. Opposite Dutch was former Ranger Scott Feldman. His night didn't go so well as he coughed up seven runs in 5.1 innings.

Hopefully the Rangers can keep up the winning even with losing Lance Berkman and Nick Tepesch to the Disabled List. Half a game isn't an impossible hill to climb but when the A's are at the top you better not trip.
Posted by Spiff at 6:37 PM

Thanks. Feeling bad that things have not taken up as smoothly after the move as I would have liked. Appreciate your support.