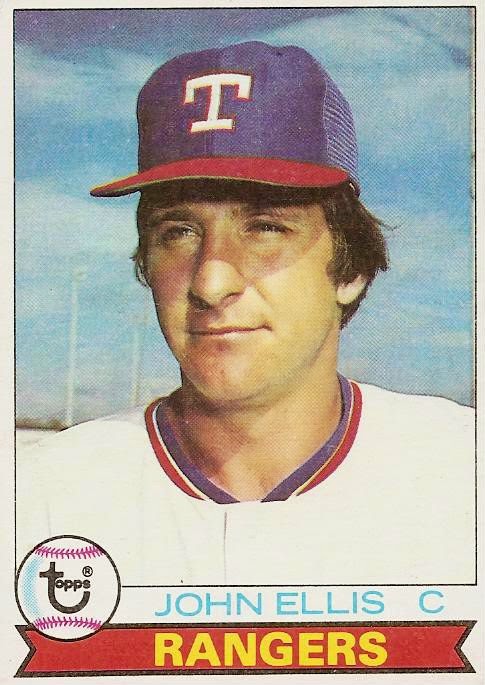 John Ellis, shown here on card 539 of the 1979 Topps set, started off the 1979 season as a player-coach for the Rangers. He was supposed to be the bullpen coach. I'm sure that after Ellis played in just 34 games in 1978, the Rangers thought the arrangement would work just fine. I don't know how long it lasted though since John got into more games in 1979 than he had been in since 1974.

Still serving as a backup catcher to Jim Sundberg, Ellis only saw action behind the plate in seven games. He caught 28 innings and committed no errors. He caught 20% of the runners trying to steal on him, 16% lower than the league average.

John's secondary position, first base, gave him the most time in the field. 185 innings over 30 games. He had five miscues there for a .978 fielding percentage, much lower than the league average .992.

John also appeared in 61 games as the Rangers designated hitter. In total he appeared in 111 games throughout the season and made 337 trips to the plate. Ellis responded to the additional use by raising his batting average to .285 and his on-base percentage to .318. He had a bit of pop in his bat as his 12 doubles and 12 home runs showed. He scored 33 runs wile driving in 61.

John Ellis managed to put together a decent season in 1979. Nothing to overawe anyone but for a backup catcher/first baseman it was more than acceptable. He was were he was though and his chances of landing a full-time spot where slim. He would be back with Texas in 1980 but it would still be as a backup.
Posted by Spiff at 11:04 AM