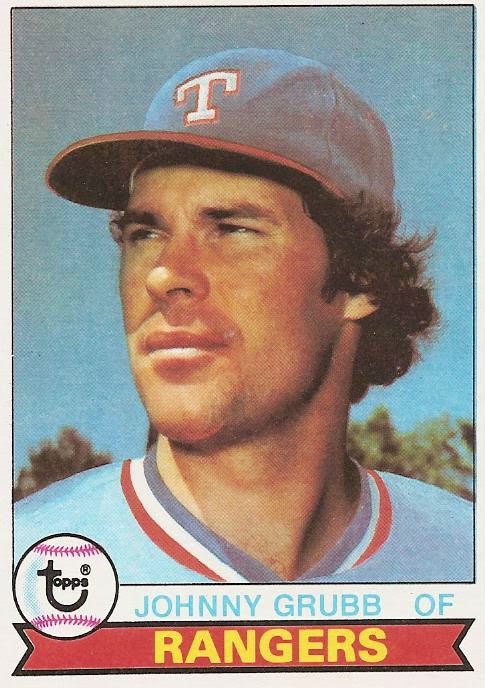 Johnny Grubb came to Texas via an August trade in 1978. He posted a .394 batting average in the 21 games he played for Texas and ensured himself a spot on the Rangers roster in 1979. He couldn't ensure he wouldn't have to undergo a terrible airbrush job on card 198 of the 1979 Topps set.

Serving as the fourth outfielder, Grubb appeared in 102 games for Texas. In 82 of those games Johnny played in one of the outfield positions. He played in all three throughout the season. His combined outfield fielding percentage was .986, five points higher than the league average. Grubb also appeared in six games as the designated hitter. The remaining games were pinch-hit appearances

Johnny made 328 trips to the plate for the Rangers and compiled a .273 batting average and a .350 on-base percentage. He also hit 14 doubles and 10 home runs. He walked 34 times while striking out 44 times.

On August 3, 1978, Grubb dislocated the pinkie finger of his left hand. That put him on the Disabled List for a month and cooled off his bat a little. He was carrying a .280 batting average when he got hurt.

Johnny Grubb had a pretty decent season for Texas in 1979. He was more than serviceable as a fourth outfielder and had a little power with the bat to boot. He needed to stay healthy in 1980 if he wanted to win a full-time job and keep it.
Posted by Spiff at 1:00 PM