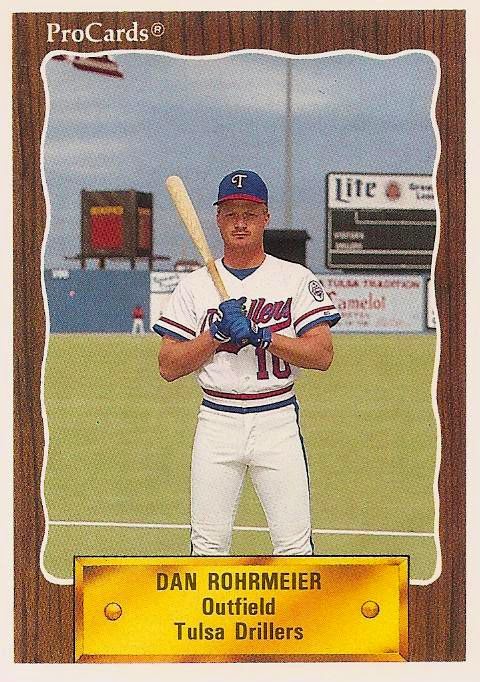 Yes, I know. Today is Opening Day 2015 and the Rangers are finally back in action after the long winter. Their opener isn't until 2100 hours though since they start the season in Oakland. Figure that gives me one more day to get in minor league card before the season starts for Texas. Hopefully they will play well enough that my posting of minor league cards will be slowed significantly. On to Tulsa for now.

Dan Rohrmeier appears on card 1169 of the 1990 ProCards Tulsa Drillers set. By 1990 Dan was set to begin his fourth season as a professional ball player. Drafted by the White Sox in the first round of the 1986 draft, Rohrmeier started his career the next year. In 1989 Chicago sent him to Texas as part of a conditional deal. Don't ask me what that means, it's just how baseball-reference.com has it listed. I wasn't able to discover the conditions on the deal or find a record of what the ChiSox got in return. After splitting the 1989 season between the Sarasota White Sox, the Port Charlotte Rangers, and the Tulsa Drillers, Dan was assigned to stay at Double A Tulsa for the start of the 1990 season.

Rohrmeier played in 61 games defensively for the Drillers in 1990. He put in the most time over 60 games in the outfield. His two errors left him with a .979 fielding percentage. He also made a cameo appearance at first in one game without a miscue.

Apparently Tulsa used Dan frequently as a designated hitter. He appeared in a total of 119 games and made 495 plate appearances in 1990 for the Drillers. He managed a solid .305 batting average and a .354 on-base percentage. He hit 24 doubles, seven triples, and ten home runs while bumping in 62 RBI. He struck out 51 times but did work 37 walks.

All in all Dan Rohrmeier turned in a successful offensive season with Tulsa. He needed some serious work on his defense but his bat seemed to be just fine. Perhaps because of his defense, perhaps for another reason, Rohrmeier was assigned to Tulsa again for the opening of the 1991 season. He needed to keep the bat going and polish up the glove if he wanted to have a chance of climbing to Triple A.
Posted by Spiff at 6:27 PM