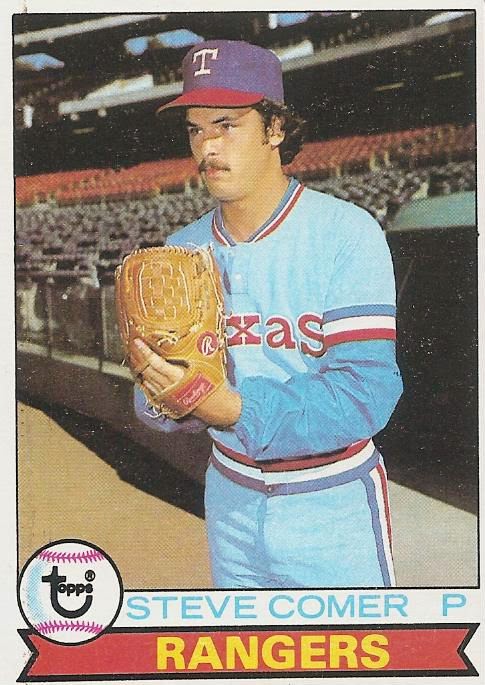 Ugly Opening Day for the Rangers yesterday. Sonny Gray held them to one hit over eight innings as the A's romped to an 8-0 tune. Unfortunately the early returns are favoring my predictions concerning Yovani Gallardo. Looks like Texas could use some pitching help.

Steve Comer, shown here on card 463 of the 1979 Topps set, was just the kind of hurler the Rangers could use now. Undrafted in 1976, Comer was signed by the Rangers to round out their pitching staff at Sarasota. He blew the doors off and garnered an invite to Spring Training in 1978, primarily to help with batting practice. Steve again turned heads and ended up making the team. His 2.30 ERA over 117 innings seemed to prove the scouts wrong.

Based on Comer's 1978 performance, he was given a chance to make the starting rotation in 1979 and did just that. All of his 36 appearances would be starts. He completed six of those games and ended the season with a 17-12 record. That put him just one start behind Fergie Jenkins and one win ahead of Jenkins to lead the team. Over 242.1 innings Steve compiled a rotation best 3.68 ERA and an 1.296 WHIP. He struck out 86 while walking 84, troubling for a control pitcher.

Steve Comer's 1979 season hadn't been quite as impressive as his rookie effort but it was still pretty good. Especially considering the struggles the rest of the rotation went through. He would be looking to nail down his starting role in 1980. He needed to get his walks down but he still had a tremendous up side. For a guy who was picking up scrap lumber on construction sites just three years previous, he had come a long way.
Posted by Spiff at 10:45 AM