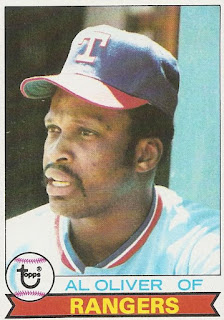 The Rangers got Al Oliver, shown here on card 391 of the 1979 Topps set, in the December, 1977 four team trade that also brought in Jon Matlack and Nelson Norman. "Scoop" had reputation as a fine defensive player who could knock the ball with the best of them. The Rangers were not disappointed with his 1978 effort. Al batted .324 with a .358 on-base percentage and a .490 slugging percentage. Apparently he was just as advertised. The Rangers would be happy if he could maintain that performance in 1979.

Oliver appeared in 136 games for Texas in 1979. He lost three weeks of playing time when he sprained his left wrist diving for a line drive on June 15th. The injury did not fully heal and bothered him for the rest of the season.

In 538 trips to the plate Scoop posted a .323 batting average, highest on the team and fifth best in the American League. He improved his on-base percentage to a team best .367 and led the club in slugging percentage at .470. Amazingly he did that without his 12 home runs, four triples, or 28 doubles leading the team. You would think with the power would come a tendency to strike out. Not so. Al whiffed 34 times but he also worked 34 walks. Not bad for a hitter with power.

The Rangers were pleased as punch with Oliver's offensive performance in 1979. His defensive numbers in center field were concerning though. Moving him to left would be the solution in 1980 but it was a situation to keep an eye on. Scoop would be 33 years old in 1980 and a resurgence of his defensive abilities was not to be expected. He could still hit though and that alone assured him of a spot in the Rangers outfield.
Posted by Spiff at 11:53 AM