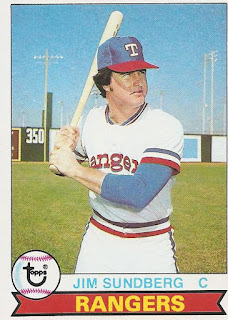 Jim Sundberg, shown here on card 120 of the 1979 Topps set, had firmly established himself as the Rangers starting catcher by the start of the 1979 season. 1978 had been another excellent year for Sunny and Texas was expecting more of the same. They would not be disappointed.

Jim's offensive numbers took a slight dip as his batting average fell to .275 over 561 plate appearances. He lowered his strikeout total to 51 and, strangely, also worked 51 walks. Both were drops from the previous season and he watched his on-base percentage lower to .345. Some of Sunny's offensive drops could be attributed to a slow first part of the season. After the first 42 games he was carrying a .194 batting average. He warmed up through the last two thirds of the season and hit .308 after May 26th. Sundberg's power specialty was doubles, he hit 23 of them to go with his four triples and five home runs. Amazingly, he tied for first in triples on the club, the second year in a row he led the team in that offensive category.

Of course, Sunny was best known for his defensive capabilities. He did not disappoint either. Jim caught in all 150 games he appeared in for Texas. That led the league in games played at catcher. He might have had even more games played had he not missed four games after being beaned by the Angels Don Aase on June 26th. Jim wasn't just an iron man though. Over the 1271 innings he caught, Sundberg posted a league best .995 fielding percentage. That was 13 points higher than the league average for receivers. He also led the league in put outs at catcher with 754. As always, opposing runners found it hazardous to run on Texas. Sunny gunned down 41% of would-be base thieves, well above the league average 36%.

The Rangers had to be happy with Jim Sundberg's 1979 season. He could use some improvement on the offensive side of things but his numbers were not in the red zone. He had established himself as perhaps the best defensive catcher in the game and was extremely durable. 1979 would see him win his fourth consecutive Gold Glove. As John Ellis well knew, being a backup catcher in Texas was a tough gig. The Rangers had no worries behind the plate for the immediate future.
Posted by Spiff at 1:54 PM