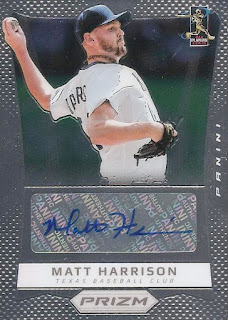 Well, it's been a couple of good days for the Rangers as they won the last two games they played in Colorado.

On Tuesday Shin-Soo Choo hit for the cycle and Delino DeShields got his first four hit game as Texas hammered the Rockies 9-0. Choo completed his cycle with a triple in his last at-bat. Hopefully that feat will help him get his confidence back and get back in stride offensively.

The star of the night though was undoubtedly starting pitcher Matt Harrison. Harrison, shown here on a signed 2012 Panini Prizm card, pitched six scoreless innings to get the win. It was his first win since May of 2014. It also marked the first time a Major League pitcher has won a game following spinal fusion surgery. Very good news and encouraging to the Rangers and Matt. By all indications he should be able to continue his comeback.

Yesterday the guys had a little more trouble but won a see-saw battle with a 10-8 final score. Rougned Odor finished a double shy of the cycle but walked to lead off the ninth. That helped set up Elvis Andrus' two run single to win the game. Good to see both of those guys contributing offensively.

The second win gets Texas to 45-49 on the season, nine games behind the Angels. Going into a series in Anaheim the team has a chance to make up some ground. This could be a crucial series.
Posted by Spiff at 7:21 AM