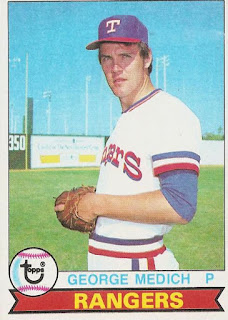 In 1979 Doc Medich, appearing here on 1979 Topps card 657, was looking to build on his 1978 season and possibly improve his standing in the Rangers rotation. The results of his 1979 campaign were mixed at best.

Medich started the season off rough by losing his spot in the rotation during Spring Training. By June 20th he had appeared in just nine games. All as a reliever. If that wasn't bad enough for a pitcher who was used to starting most of the games he appeared in, he was carrying an 0-3 record and an 8.27 ERA. Needless to say, his chances of getting back into the rotation seemed slim. However, an injured Jon Matlack helped stretch the starting staff thin. On June 24th the team played a double-header against Oakland and there was nobody available to start the second game. In desperation, manager Pat Corrales gave Doc his first start of the season. The result was seven innings of shutout ball and a 7-2 win.

From that point on, George's season seemed to get on track. Medich went 10-4 with a 3.45 ERA over the remainder of the season as he returned to the starting rotation. That helped his season numbers some but the first part of the year still pulled them in the wrong direction.

Apparently Doc Medich was better starting ballgames than he was out of the bullpen. Strictly viewed from a starting standpoint, his 1979 season was the improvement he wanted. The first part of the season couldn't be written off though and it was concerning. Texas would be taking a close look at Medich as he went into 1980. He would likely stay in the rotation but needed to show that the second half of 1979 was not a fluke.
Posted by Spiff at 11:15 AM