Are they or aren't they? 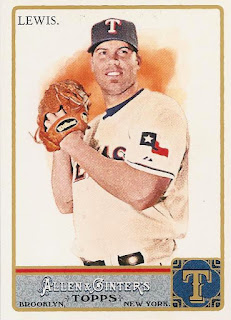 The Rangers are currently riding a three game win streak and knocked off the Angels last night in Anaheim. That helps Texas keep the best road record in baseball. Can't say I was upset to see the guys ride into the Big A and beat the Halos.

Josh Hamilton led the offensive charge in his first return to Anaheim since rejoining the Rangers. Hamilton served as the rally sparker, going 2-for-4 with a double and two runs scored. That accounted for half the Rangers scoring. One Hamilton run was on an excellent squeeze bunt laid down by Robinson Chirinos. The other was on a Shin-Soo Choo double.

Meanwhile Keone Kela struck out Albert Pujols to end the eighth inning with the tying run on base. Shawn Tolleson tossed a scoreless ninth to finish up the game.

The true star of the night though was starting pitcher Colby Lewis, shown here on card 87 of the 2011 Allen and Ginter set. Colby has been the Rangers big game guy in the past and he brought his A game to the Big A. Over 7.2 innings Lewis allowed just five hits and one walk while striking out nine. The Angels scored just two runs on him as the win moves Lewis' record to 10-4. It was a head-turning performance to be sure. That leads to the dilemma.

The Rangers win drops the Halos into a tie with the Astros for first place but only brings Texas to 7.5 games back. Of course, they're ahead of Seattle and Oakland and could conceivably still make a run. The chances of such a run seem to be very hard to gauge with this team. Jon Daniels is to the point in the season of deciding if he is going to buy or sell. If the guys take this series from the Angels will that mean they could stay in the mix? If so, are they strong enough to go all in? Colby Lewis thinks they are still a contender. He said so when asked if his performance last night might get other teams to call about him. Of course, he's going to be optimistic, players always are. It appears Colby Lewis might have just won another big game for Texas. What that game means remains to be seen.

If the decision is to sell then the question becomes, how much? With the young guys the Rangers have, and if Darvish, Holland, and Harrison are healthy next year, contention in 2016 is a real possibility. If JD decides to sell, he might also be buying for next year. With his age and contract status, Lewis could well be on the block if the Rangers decide they won't be needing him for any big games.

The Texas front office has some tough decisions to be making in the next few days and it's impossible to predict the course they will choose. You can read and hear pundits on both sides of the issue and all of them seem to be absolutely certain they are right. The fans are equally divided. I don't expect a full-blown fire sale but anything beyond that is possible. One thing's for certain, no matter what decision is made, somebody's going to be unhappy about it.
Posted by Spiff at 7:49 PM