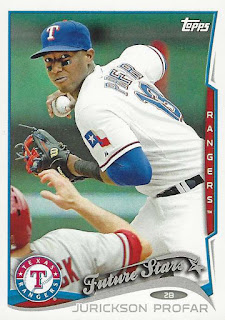 Well, the computer issues are not yet fully resolved but I now have a borrowed computer and most of the scans I lost have been replaced. (Big thanks to Jim From Downington for the scans of Senators cards he sent my way to help out in a time of need.) Hopefully I am back to regular, or at least semi-regular posting.

Yesterday would have been my first post back but I got a call from my brother. He's in the area on military leave and thought a Rangers game sounded good. Since last night was $11 tickets to welcome Yu Darvish back, we thought so too. Got the family loaded up and met my brother and his family at The Ballpark to see the boys welcome in the Houston Astros.

The stadium giveaway of the night was a Rangers cap with a Hawaiian print brim. Spiff Jr, being partial to his mother's home state, was impressed. Unfortunately, the giveaway was limited to those fans 14 years of age and older. At 11 years old Spiff Jr fell under the cutoff. Undaunted, he took his last $5 and went in search of an Astros fan whom might want to part with their cap for snack money. Hitting up anyone with 'Stros colors, he met with some initial rejection but persisted until he found a gentleman who said he did not want his cap but would not sell it. He would only give it to Spiff Jr free of charge. An extremely nice gesture and one that really put a smile on a young Texas fan's face.

As things turned out, Rangers fans had much to smile about last night. Rougned Odor was the star of the game but I don't have any cards left of him that I haven't already posted. Since Jurickson Profar, shown here on card TEX-11 of the 2014 Topps Texas Rangers set, made the first noise I will post one of his cards instead. The Astros got a runner to second in the top of the first but weren't able to get any runs scored. Profar led off the game for Texas with a triple. Ian Desmond singled to score him. Nomar Mazara singled. Adrian Beltre struck out then Desmond scored on a wild pitch. Odor singled and Prince Fielder (batting sixth) singled as well to score Mazara and pick up a RBI. Just like that, the Rangers had a three run lead.

Colby Lewis held off Houston until the top of the third when his own error set up a three-run homer by Jose Altuve to tie things up. Rougned Odor led off the Rangers third with a solo home run to again give the Rangers the lead. Houston scratched out a run in the top of the fourth to re-tie it. The teams traded runs in the seventh to keep the game tied. Headed into the ninth I was beginning to think maybe extra innings. Sam Dyson disposed of the 'Stros quietly in the top of the ninth. Desmond struck out to start off the Rangers half of the inning but then Mazara singled to get things going. Mazara got erased on a ground ball from Beltre but then Odor saved the day by doubling off the left field wall to score Beltre and end the game on a walk-off.

All in all, it was a great day at The Ballpark. A Rangers win and some great family time. Also saw some folks from church and they ended up moving mid-game to join our group. As we arrived at home we got the good news that the Mariners had lost, moving Texas up to a four game lead. Nice cap to the day.
Posted by Spiff at 11:32 AM