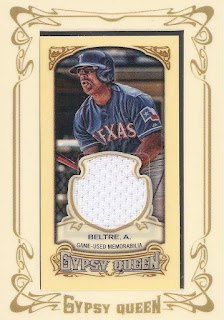 Well, the Rangers lost 3-1 to the Houston Astros last night. It was the first Houston win in seven tries at Arlington this season. Fortunately Texas had a cushion in their lead over Seattle in the American League West.

To add injury to loss, the Rangers saw Yu Darvish leave the game in the after five innings. He experienced tightness in his right shoulder. A preliminary exam didn't reveal any damage to the shoulder and Yu said he felt like he could play catch today. There will undoubtedly be a follow-up exam though so nothing is certain yet.

In the eighth inning another potential disaster struck. Adrian Beltre, shown here on card GMR-AB of the 2014 Gypsy Queen Relics set, called for a trainer after running from first to second. He ended up being taken out of the game with tightness in his left hamstring. He will be reevaluated today, which was supposed to be his regular day off anyway.

Jeff Banister was non-committal on the injuries, saying he was waiting to see how the follow-up evaluations went before making any comment. Hopefully his comment will be that both players are fine and just needed a little extra loosening up. The Rangers really need both Beltre and Darvish at this point in the season. For Rangers fans still suffering nightmares from 2014, the potential injuries are triggering concerns.