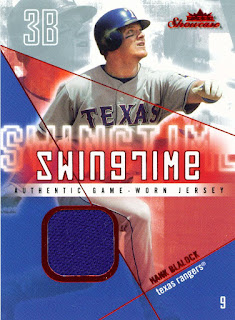 Today we have former Ranger Hank Blalock featured on card ST-HB of the 2005 Fleer Showcase Swingtime set. The card includes a piece of one of Hank's jerseys and is numbered 56/610. Other than picturing a power hitter, it has little to do with today's post. That's what happens when I'm about out of game-used or autographed cards of the current roster.

Last night the Rangers played game three of four in Oakland. The A's are always tough at home and since Sonny Gray was on the mound I figured it was going to be a rough night for Texas. It was for most of the game.

Opposing Gray was the recently unpredictable Derek Holland. Dutch is becoming more and more like the Mother Goose rhymes girl with a curl in the middle of her forehead. When she was good she was very very good; but when she was bad she was horrid. Holland was good through two, allowing no A's runs. However, he fell apart in the third as the A's put up three. Two more Oakland runs in the fourth convinced Jeff Banister to pull the plug before it got worse. Five runs, four earned, in 3.2 innings counts as horrid. In came the bullpen. That's been a portent of doom for Texas this year, but not last night. Martin Perez hurled 2.1 scoreless innings. Matt Bush, Jake Diekman, and Sam Dyson all followed with a scoreless inning each.

Meantime the Rangers offense took on the task of coming back from a 5-0 hole with Sonny Gray still on the hill. Sonny kept the Texas bats quiet until the sixth inning when a five run outburst drove him from the game. Interestingly, the Rangers scored those five runs on just twenty pitches. Part of the comeback consisted of home runs by Rougned Odor and Robinson Chirinos. Robinson's was a solo shot while Rougie's was a two-run blast. The uprising tied the game.

In the seventh inning Chirinos hit his second home run of the game to give the Rangers a 6-5 lead, the first lead they had all night. Not to be outdone, Odor hammered his second shot of the game in the eighth to take the tally to 7-5. That's where it sat when the Rangers recorded the 27th out to end the game and take the win.

All in all it was a wild night. Nothing like a pitching melt down and a dramatic comeback against to make for a good night in the end. While Holland is concerning, it was very nice to see the bullpen manage 5.1 innings of scoreless ball. It is also great to see Odor and Chirinos powering up. Now to get the rest of the offense on board this afternoon to back Colby Lewis as he finishes out the series.
Posted by Spiff at 11:48 AM