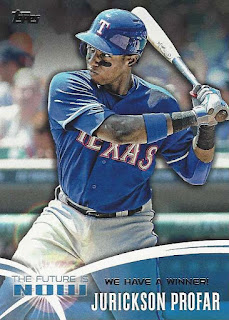 The Rangers finished up a ten game road trip last night in St Louis by putting up a second come-back win in a row against the Cardinals.

Texas started Martin Perez while the Cards sent Mike Leake to the hill. The Rangers struck first with a run in the first inning but the Redbirds came back with a run in the second and one in the third to take the lead. A Mitch Moreland home run in the fourth tied the game up and a Nomar Mazara long ball in the 6th gave Texas a 3-2 lead.

Unfortunately, Perez stumbled in the bottom of the sixth and allowed a run before leaving the game with the bases loaded. Tony Barnette finished the inning but not before a second Perez base-runner crossed home. That left the Rangers down 4-3 with three innings left to play.

After coming up empty in the seventh, Texas managed to load the bases after Moreland hustled into an overturned out call at second. If Mitch hadn't been really moving, the inning would have been over. That brought up pinch-hitter Jurickson Profar, shown here on card FN-5 of the 2014 Topps The Future is Now subset. This year seems to be Profar's future and he continued the trend by lining a single into center. The hit scored Rougned Odor and Moreland. That gave the Rangers a 5-4 lead.

In came Matt Bush and Sam Dyson to keep the Cards bats quiet in the eighth and ninth respectively. The Texas victory resulted in the first at home series sweep for St Louis since 1983 and gave Texas an 8-2 record for their road trip. It also pushed the Rangers to 20 games over .500 and gives them a 8.5 game lead over second place Seattle.

The run by the Rangers so far this season has been unbelievable. Before the club broke training camp, I thought this team had a chance for something big. Now I am starting to get real excited. Probably more so than for any Rangers squad since 2011. Barring something unforeseen occurring, the rest of this season is going to be an exciting ride for the Rangers and their fans.
Posted by Spiff at 1:52 PM