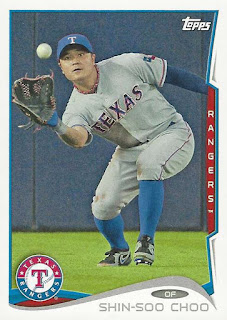 Once again, Derek Holland didn't last long enough to get a decision last night against Baltimore. Dutch went just 4.1 innings and allowed three runs before being yanked. That performance was enough to leave the Rangers behind 3-1 going into the bottom of the fourth. Fortunately Shawn Tolleson, Tony Barnette, and Sam Dyson kept the Birds off the board for the rest of the game.

In the bottom of the fourth Texas rallied. Prince Fielder scored on a Bobby Wilson sacrifice fly to bring the score to 3-2 O's. That brought up Shin-Soo Choo, shown here on card TEX-13 of the 2014 Topps Texas Rangers team set. Choo shot a single to right that scored Elvis Andrus and Mitch Moreland. That put Texas up 4-3 and that was the final score.

This game was a makeup from a rain out in April so it counted as a series of its own. The Rangers win gives them ten straight series wins.

On the upside, the bullpen has been unbelievable recently. After some struggles early, the relief core has been lights out and is directly responsible for several of the wins on the recent road trip as well as last night. Also good to see the offense working. Seems a different guy comes through every day and that's key. Depth and versatility is what is keeping this team rolling. Very exciting to see their come from behind ability.

Of course there is always a shadow. In this instance it's Derek Holland. Dutch needs to get whatever it is wrong figured out and fixed. The wheels have really come off the wagon for him this year. Fortunately for the team, the rest of the rotation has picked things up. That won't make much difference for Holland when the front office patience runs out. Judging by how fast he's been pulled his past two appearances, he's now on a very short leash. That likely puts him on a short list as well and he could be looking at the bullpen or being designated for assignment if he can't pull things together.
Posted by Spiff at 11:50 AM