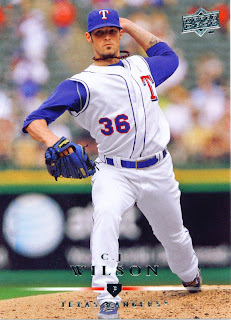 Sorry about missing the last three days. Between work, overtime, and a kiddo's doctor appointment things got a bit busy. Hopefully work will be back to somewhat normal by the end of next week. Until then I will continue to try and post as often as possible.

Ok, let's see. A lot has happened in the past three days. A win against the Yankees then a loss. A day off and then beating the A's in both games of a double header yesterday. At the end of it all the Rangers are now 4.5 games ahead of the Angels. Hopefully the team can take the A's today and tomorrow as well for the series sweep.

In spite of losing the series to the Yankees, it is good to see the Rangers add to their lead within the division. Very nice to pick up a game and a half in one day like they did yesterday.

C.J. Wilson gets today's card due to his performances against the A's in the twinbill. Wilson, seen here on card #679 of the 2008 Upper Deck set, pitched in both games. He tossed two innings total allowing no hits and no runs. That was good enough for a win and a save on the same day. Nice to see C.J. putting it together.
Posted by Spiff at 10:24 AM