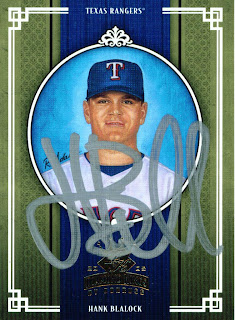 Hank Blalock delivered last night against the Angels. He went 3-for-5 with three RBI and three runs scored. Two of his hits were home runs and the second home run was a walk-off homer in the ninth inning to win the game for the Rangers.

He also delivered this morning. When I checked the mail I found this card. I had sent this 2005 Donruss Diamond Kings card to Hank care of the Rangers and asked for Blalock's autograph. I sent it in June of last year just before he got hurt the second time. Following that injury I had given the card up as lost. Not so. The Hammer signed it and got it back to me. Now that's a home run. Thanks Hank.

Hank's home run saved Frank Francisco's bacon. In one inning pitched Frank gave up two walks, two hits (one of them a home run), and three earned runs. That performance is what made Blalock's walk-off homer necessary. Ron Washington said yesterday before the ball game that Francisco is back to being the closer. His performance last night was not very closerish it seems. Hopefully it was just a rough spot and Frank will get it back together again.
Posted by Spiff at 11:08 AM