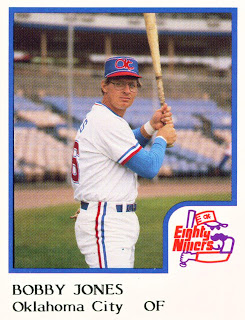 For today's trip down to the farm we see Bobby Jones on his 1986 ProCards Oklahoma City Eighty Niners card.

The ironic thing about this card is that Bobby didn't play for OKC in 1985, the year of the stats on the back of the card. That's why he also appeared on a 1986 Topps card. He played for the Rangers that year. In 1986 Jones would spend most of the year in the minors but would bounce back to Arlington for 13 games.

Bobby's 1986 stint with the Rangers would be the end of his Major League career. His playing days would end one year later after a season at Double A Tulsa.

In 1988, the year after his playing career ended, Jones started managing in the minors. Since then he has managed 19 seasons, all with the Rangers organization. He started out at A ball and spent three seasons there before moving up. Double A followed for two years and then Triple A for two. Back to Double A after that for six seasons. A year off in 2001 and then four seasons at Triple A. Since 2005 Bobby has managed at Triple A in odd-numbered years. It will be interesting to see if he breaks the trend and returns in 2010.
Posted by Spiff at 5:30 PM

It's always nice when you can not only be informed, but also entertained! I'm sure you had fun writing this article. Excellent entry! I'm been looking for topics as interesting as this. Looking forward to your next post.