Getting his name in the papers. 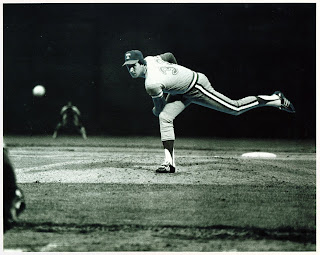 Got this picture in today. It is about 8x10 and is a glossy black and white. I picked it up on Ebay. Why, you might ask. Well, in addition to it being a picture of Jon Matlack there are a couple of other interesting points.

The picture has no description on the front but if you turn it over the situation changes. It came from the archives of the Chicago Sun-Times newspaper and is stamped as such. According to the label glued to the back, the photographer was Chuck Kirman. Mr. Kirman took the picture in the 1st inning of the June 2, 1980 game at "Sox Park" as the label puts it. Under the label is a strip of newspaper that contains the caption used in the paper the next day. "Rangers' Jon Matlack fires away. He retired the first ten Sox before Alan Bannister singled in the fourth. (Sun-Times Photo by Chuck Kirman)" On June 3, 1980 the picture was stamped again as it was placed in the Sun-Times library.

Since I had a specific date for the game that Jon is shown throwing in I decided to see how he did. According to Retrosheet the Rangers got one run across before Jon ever threw a pitch. He is working with a 1-0 lead here. Matlack then held the ChiSox scoreless until the bottom of the fifth when they pushed across a run. In the bottom of the sixth Jon came on with a 1-1 tie and got Harry Chappas to foul out to third baseman Buddy Bell. Then is started to rain. At 9:10 p.m. a rain delay was called. At 9:40 the umpires called the game.

Kind of bummed out that this picture wasn't from a win. I guess it wasn't from a loss either though so that works out I suppose. I like it because I have found way more pictures of Jon with the Mets than with the Rangers. Nice to see him with the "T" on his hat.
Posted by Spiff at 9:20 PM

That is a great find. Its always nice to find something like that. A piece of the game and a piece of the story about the game coming to life in the newspaper.