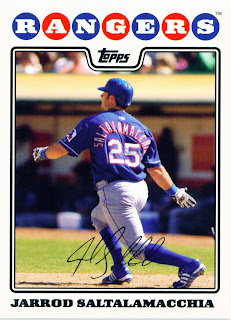 The Rangers are holding a mini-camp this week in Arlington. Jarrod Saltalamacchia, shown here on card number 399 of the 2008 Topps set, is one of the players in attendance. So far things seem to be going well. The team is saying that Salty will be ready for Spring Training and the 2010 season.

Having Jarrod well and over his thoracic outlet syndrome would be nice. I hope it happens and isn't a lingering issue. With the departure of Ivan Rodriguez to Washington, Salty is now the front-line catcher going into the season. After him and Taylor Teagarden the options thin considerably. Both need to be healthy for the team to do well coming out of the gate.
Posted by Spiff at 4:40 PM