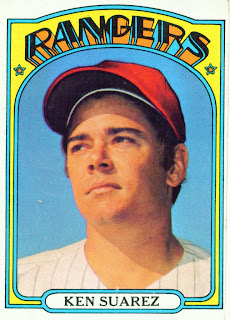 Time to take another look back at an original Ranger. Today we have Ken Suarez on card number 483 in the 1972 Topps set.

Ken was traded to the Rangers in December of 1971 along with Roy Foster, Rich Hand, and Mike Paul. Texas gave up Gary Jones, Terry Ley, Danny Riddleberger, and Del Unser in return.

Ken was the fourth catcher on the Rangers roster in 1972 and he played in the fewest games of any of the catchers. First string catcher Dick Billings appeared in 133 games compared to just 25 for Suarez.

In those 25 games Ken had 36 plate appearances. He posted a meager .152 batting average. He did catch three of the four runners who tried to steal on him but committed two errors in 57 chances. Ken would see more action with the Rangers but that would be the next season.
Posted by Spiff at 6:24 PM

Wow, that is one heck of a fake red cap. Looks like it's radioactive.

Yes it is. The airbrushing job by Topps on these '72 Topps leaves a little to be desired.