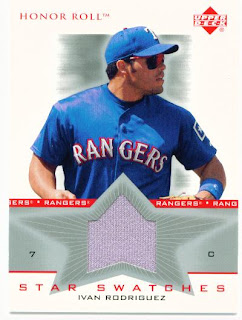 So, it's looking like Johnny Damon is having a hard time coming up with a team to play for in 2010. MLB.com has a great article on the situation. Hal Bodley brings up a great point about agents, players, and teams.

I have long been conflicted on Curt Flood's impact on the game. It is obvious with any little study that players were often taken advantage of by the owners before free agency. From that perspective I think that the idea was a good one.

The problem is that I can now see some players being taken advantage of by the agents. Scott Boras is obviously the worst offender in this regard but I think it happens more than is spoken of. After all, an agent is paid at least in part on commission. That gives him the incentive to get the most dollars, regardless of the player's best interest or wishes. As Bodley says in his article, it doesn't always have to be that way.

I remember in 1997 when the Rangers were shopping Ivan Rodriguez. Pudge, shown here on card #SS-IR3 in the 2002 Upper Deck Honor Roll set, was coming up on free agency. The team had a made an offer and Ivan's agent declined it. The problem was that he wanted to stay in Texas. My grandfather told me that Ivan talked to his mom and she told him to talk the the Rangers' GM on his own. He did so and came out with a contract. Sports Illustrated substantiates that story. One has to wonder why that didn't happen this past off-season, especially with Rodriguez's age and his stated desire to retire a Ranger.

My Grandfather also used to say that one of the reasons he was so impressed with Rusty Greer was that he didn't use an agent but negotiated his own contracts. I wasn't able to confirm that but it seems to fit Greer's personality.

So, why can't the players and teams talk without the agents? Most players are at least decently educated and could understand the negotiations. Independent parties could be hired to evaluate the contracts to make sure they were not unethical. Teams would have an incentive to be fair in order to get the player to talk to them the next time he came up for free agency. Players would garner more fan support if they stayed with the team and could use that the next time around as a bargaining chip. If they felt too intimidated why not hire a consultant for a set fee to provide advice during the talks? A set fee rather than a commission and success being determined by the player's satisfaction rather than dollars would change the consultant's motivations.

I would have loved to see Pudge stay with Texas for the upcoming season. Johnny Damon appears to have wanted to stay in New York. Could both situations have been avoided?
Posted by Spiff at 4:44 PM

Every off-season it seems like agents like Boras make the decisions for their "clients" and we all suffer because of it. It would be nice to see a few of these players step up and take control of their situations. So many players seem to have forgotten that agents supposedly work for them, not the other way around.

It does seem like the last consideration is team loyalty. The agents undoubtedly influence player decisions with the "we can get more money" mantra. :(