Sold to the man in the big hat! 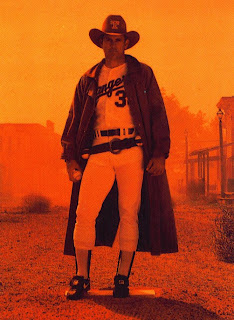 The sale of the Texas Rangers is finalized according to a story on the Rangers site. Nolan Ryan is one of the big players in the purchasing group and will stay on. According to T.R. Sullivan, Nolan will be in charge of baseball while Chuck Greenberg will be the managing partner. That means Nolan will do what he knows and Greenberg will concentrate on what he knows, promoting the club and running the business side. Tom Hicks will stay on as a minority owner and will have no say in the day-to-day operations of the club.

Looking at this early 1990's card of Nolan Ryan we can at least figure where he got a large part of the money that he is now putting into the Rangers. If I were Nolan you would have to pay me quite a chunk of change to appear in that outfit. Looks like the photo shoot took place on one of John Wayne's old sets. I have no idea why the picture is tinted orange.

As you might figure, the back of the card gives no clue as to the identity of the distributor. It is titled "Texas Ranger" and states that on July 31, 1990 Nolan became only the 20th pitcher in MLB history to win 300 games.
Posted by Spiff at 11:00 AM

The picture is cropped from a Nike poster of Nolan Ryan that can be seen at the link above.

That is an awesome card