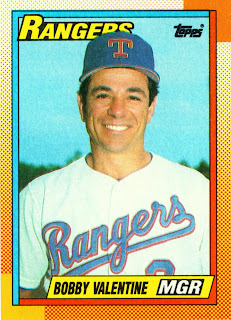 Sorry about the lack of a post yesterday. I was out of town all last week and had scheduled posts for every day except for yesterday. That was the travel home day and I had hoped to be more up to posting. The late night visits with family and the drive home wore me out though.

While I was gone I did keep up on things. So far nobody has a correct answer in the contest to guess how many Rangers cards I have. Only six entries though and plenty of time to get your number in.

Decided to post card number 729 from the 1990 Topps set today. This card features then Rangers manager Bobby Valentine and is a common enough card. It does mean a little more to me now than it did a week ago.

I have mentioned before that I get my love of baseball from my father and his father. My Dad is a Cardinals fan though. The Rangers were a bug that skipped a generation and came straight from Pop. Bobby Valentine was the Rangers skipper when my fascination with the team really took off. I can remember visiting my grandparents in Texas and listening to Pop talk about the Rangers and Bobby. Pop wasn't shy either about verbally stating while listening to a game that he thought Bobby ought to give this or that pitcher "the hook."

Within a couple of years of aligning under the Rangers colors I took up card collecting. Pop never collected cards himself but would look through whatever I had with me and wasn't above taking me to the local card shop. He was also willing to give cards as a gift and did so several times. Most were Rangers but occasionally there was an old time Cardinal in the mix (Pop was originally a Cardinal fan).

At one time I gave Pop a gift from my collection. I don't remember the occasion but I do remember picking out the cards and putting them in a wall-hanger. The hanger was about the size of a poster and I had cards in every other space, had to allow for additional cards in the future you know. The cards were all Rangers. In the middle was a Fleer logo sticker and a 1990 Topps Bobby Valentine.

Pop took the gift with a thank you and a hug, like he took all gifts. He then hung it on the wall in his study. I think I gave him additional cards once or twice before my collecting hiatus. I know he never purchased any himself.

Pop died in the summer of 2007. For the past two years my grandmother has been saying that my brother (the only other card collector in the family) and I should take Pop's cards. I didn't want to but we finally did this past week. My brother let me have the Rangers and he took just one Stan Musial card for himself.

It seemed so final. Taking the bent and slightly yellowed cards down and out of the hanger. I'm going to keep them separate from my collection, maybe put them back in the hanger and on Spiff Jr.'s wall. I wanted to ask Pop about the Rangers' chances for next year. He was always saying that next year would be the year. Maybe it will and maybe not. Even if it isn't at least we always have the years past.
Posted by Spiff at 5:26 PM

Keep those cards separate and cherish the memories.

Nice story. That is what makes cards more than little pieces of cardboard.