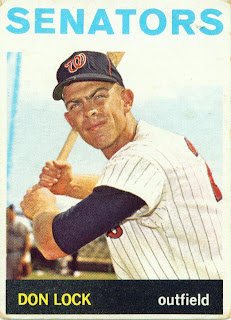 As becomes a typical power hitter, Don also struck out a lot in 1964. He led the team with 137 whiffs. That placed him second in the AL.

On the other side of the ball, Don played 1281.1 innings in the field. That was the most on the team. During that time he had 372 chances. He made 354 putouts and had 19 assists. He did make five errors but still managed to post a .987 fielding percentage. That was seven points better than the year before.

Don's performance coupled with Washington's dismal record probably accounts for something that had not happened up to this point for Don and never would again in his career. He actually showed up in the MVP voting. He ranked last in the voting but at least his name came up.
Posted by Spiff at 11:43 AM

He has without doubt the craziest eyebrows I have ever seen.