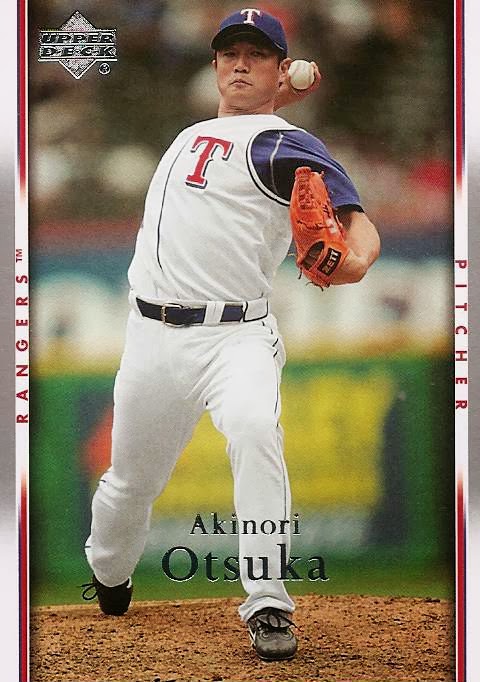 Well, good news on Matt Harrison. Apparently the MRI showed no major issues or damage. He'll be behind in his prep now but hopefully will still be able to pitch this year. That's going to be a huge relief to a lot of Rangers fans.

Speaking of relief, Akinori Otsuka shows up at number 44 on T.R. Sullivan's list of the Top 50 Seasons in Rangers History. Texas obtained Otsuka, shown here on card 228 of the 2007 Upper Deck set, in January of 2006. 2006 was his first season with the club and the season for which he makes Sullivan's list.

The Rangers started 2006 with Francisco Cordero as their closer. He stumbled coming out of the gate and lost the job to Otsuka in April. Akinori took advantage of the situation. He came out of the bullpen 63 times during the season and finished 48 of those games. Over the course of the 59.2 innings he pitched he struck out 47 batters while walking just 11. Those numbers helped him post a 2.11 ERA and a 1.073 WHIP. He ended the season with 32 saves.

Otsuka had a great season in 2006. It's even better when you consider the unexpected change of roles he dealt with and the fact that the team he was pitching for went 80-82 on the season. In addition to bringing relief, Otsuka was one of the few bright spots on the Rangers pitching staff.
Posted by Spiff at 11:48 AM