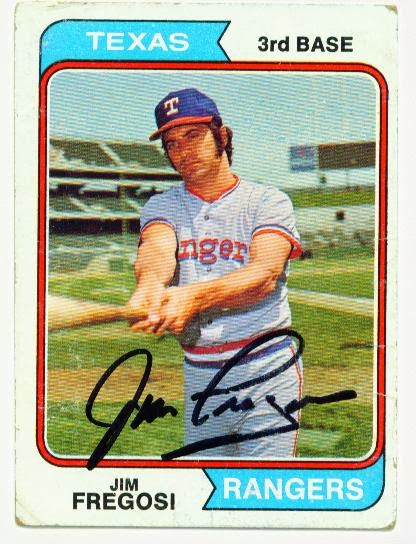 Former Ranger Jim Fregosi signed this 1974 Topps card for me through the mail in 2009. He was gracious and fast. The return took only about a week.

Last night I came home from work to discover that Jim was in critical condition after suffering multiple strokes during a Major League Baseball Alumni cruise. He was initially hospitalized in the Cayman Islands before being airlifted to Miami. This morning brought the sad news that he passed away in the early hours of the day. My heart goes out to his wife and children with their loss.

Fregosi was the first real star for the Angels and was responsible for much of their early success. He went to the Mets in the trade that sent Nolan Ryan to California and in 1973 the Rangers got him from New York. Jim would play in all or parts of five season with Texas and appear in 271 games. In 1977 the Rangers traded him to the Pirates. The Bucs released him in 1978 and he was immediately hired as the Angels manager. He had success as a manager for the Angels and Phillies before moving into the front office realm.

Jim's time with Texas was on the downhill side of his career and he is best remembered as an Angel. A family man first and an Angel at shortstop. My condolences to Tom over at The Angels, In Order and all of the other Halos fans out there.
Posted by Spiff at 11:30 AM