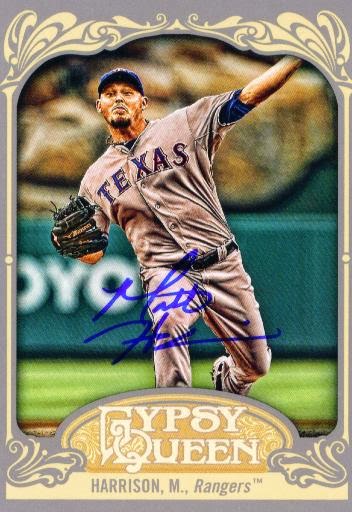 Well, the bad news has begun for the Rangers in Spring Training. Matt Harrison, shown here on a 2012 Gypsy Queen card he signed through the mail for me last year, has been shut down from all baseball activity. Harrison came into camp at 100% after missing almost the entire season last year with two back surgeries. He had some neck stiffness that curtailed his activities yesterday. Today he came in with stiffness in his back in the same area he suffered a herniated disk last year. He's on his way back to Texas to have an MRI and examination by the same doctor who operated on him. Best case scenario is that he won't be ready for Opening Day. Worst case is another surgery and another missed season. That could spell the end of his career.

Of course, losing Harrison out of the starting rotation does spell trouble for the Rangers as well. With Derek Holland already gone, Harrison was seen as a must for Texas to stay competitive. Now the starting rotation is looking like Yu Darvish, Martin Perez, Alexi Ogando, and two question marks. Colby Lewis, Robbie Ross, Tommy Hanson, and Nick Tepesch are the primary contenders to fill the bottom two spots in the rotation. It's not exactly a situation formulated to elicit confidence. Any further injuries or setbacks and it's going to get real ugly.

One possible solution floating around is to sign Nelson Cruz. Nellie can't pitch but he can hit. Right now Mitch Moreland is the Rangers Designated Hitter after being displaced at first base by Prince Fielder. Perhaps he, or Cruz in a pinch, could be traded for some pitching help. It's an interesting thought but I doubt the Rangers could trade just one bat and pick up a middle of the rotation hurler. The next week or two could be very interesting.
Posted by Spiff at 11:12 AM