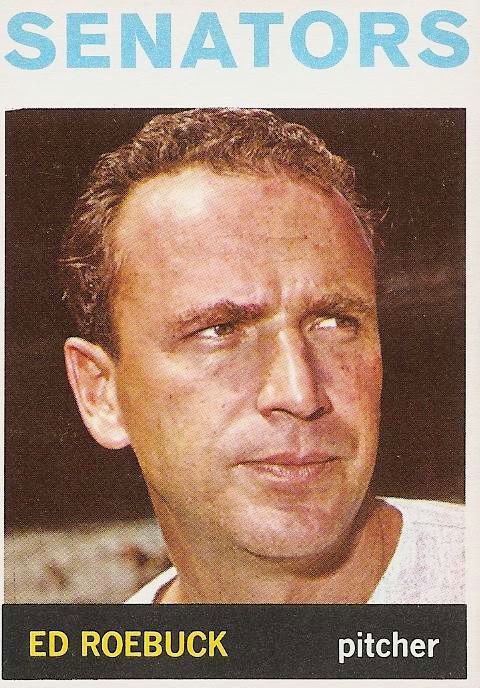 It looks to me like the hatless Ed Roebuck may be wearing a Dodgers jersey on card 187 of the 1964 Topps set. Washington got him from Los Angeles on July 30, 1963 in exchange for Marv Breeding.

You would think that would at least earn Ed a look in 1964. Not so. The Senators sold his contract to Philadelphia on April 21, 1963 after he had pitched just one inning. Roebuck went on to have possibly the best season of his career. With the Phillies locked in a fight for the pennant, they would call on Ed 60 times, all in relief. He would finish 27 of those games and pitch a total of 77.1 innings. His 2.21 ERA and 1.034 WHIP made him the most dependable reliever coming out of the Philadelphia bullpen.

I think I've mentioned before that Spiff Jr, my Dad, and I are replaying the 1964 National League season with Strat-O-Matic. My Dad has the Cardinals, I have the Reds (among other teams), and Spiff Jr has the Phillies (and Pirates). That's the top three teams at the end of the real season - only a game between them. Needless to say, I've grown familiar with Ed Roebuck coming into a game to shut it down for the Phillies. The back of this card refers to Ed as "an ace fireman." Based on the number of times he is calling on Roebuck, Spiff Jr seems to agree with that assessment.
Posted by Spiff at 2:58 PM