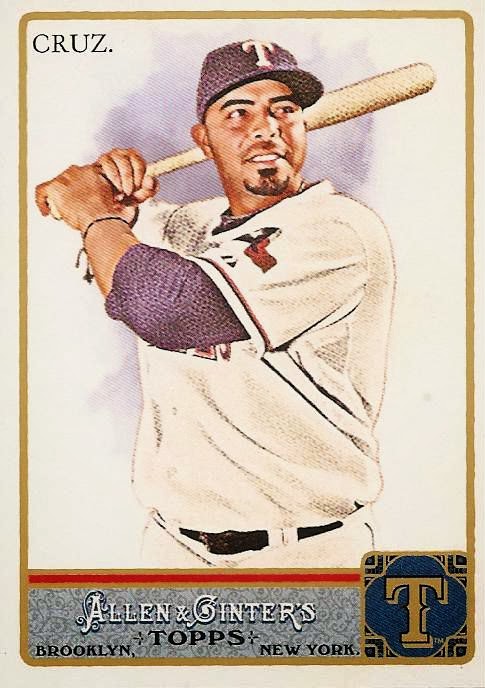 Ron Washington and Jon Daniels have been saying they expected Nelson Cruz, shown here on card number 25 of the 2011 Allen and Ginter set, to sign elsewhere. He did so this morning. Eight million for a one-year deal with Baltimore. Texas at least gets a draft pick out of the deal. Strikes me that Nellie had to settle for fewer years than he would have liked. Hopefully that's related to his PED suspension and will help send a message to any other players thinking about using to get the big contract.

Geovany Soto's going to miss the next three weeks of Spring Training. He had surgery this morning to remove a bone from his left ankle. Apparently the bone was putting pressure on a tendon and causing soreness. The team is expecting him to be back in time for a few Spring Training games and the word is he should be ready to roll on Opening Day. Hope so. Guess if he isn't JP Arencibia will have a shot at grabbing the starting role.

Matt Harrision is back to saying he should be back on track soon. His MRI Thursday showed no problems and he says his back feels a lot better after sleeping on the floor. He's still going to be examined by a doctor in Dallas next week. Lots of folks out there with their fingers crossed hoping for the best. If Harrison can return to something close to his 2012 form I will feel a lot better about the pitching situation.

Mitch Moreland is reportedly working on playing the outfield. It's not altogether new territory for him. He played right field a lot in the minors as I recall and spent some time there the first year or so he was up. I guess he is figuring the more valuable he is to the team the better his chances of staying around. Looks like his chances may have improved with Nelson Cruz's signing by the Orioles.

Still no word on how the starting rotation is looking. I wouldn't be surprised if the management wants to give everyone in the hunt a good long look before deciding. Let the guys get into form before trimming the list. It would be nice if the decision is a hard one and the club ends up with someone waiting in the wings if there is a stumble.
Posted by Spiff at 11:38 AM