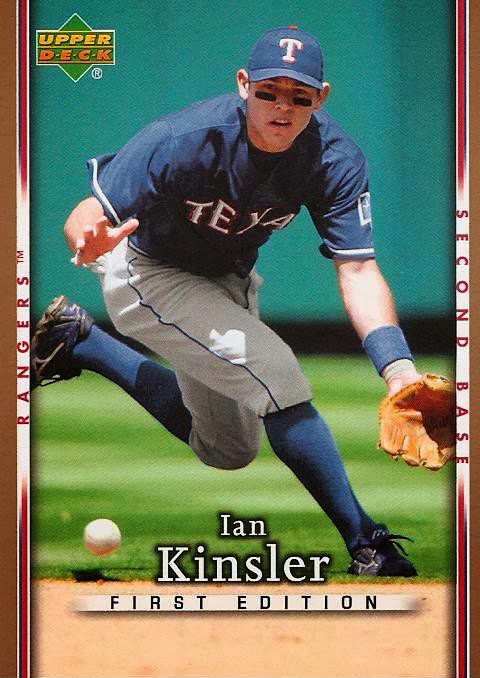 Other than the Rangers selling the naming rights for The Ballpark in Arlington to some insurance company and scouting a Korean pitcher, the news has been rather quiet. Time for another installment in T.R. Sullivan's list of the Top 50 Seasons in Rangers history.

In 640 plate appearances Kinsler posted a .253 batting average and a .327 on-base percentage. Those numbers alone would not have gotten him on the list. Add in his career high 31 stolen bases, career high 86 RBI, 101 runs scored, 32 doubles, 4 triples, 31 home runs, and 59 walks. Somewhere during this first 30-30 season, Kinsler also hit for the cycle. That makes Sullivan's decision to list this season much clearer. Amazingly, Kinsler missed the All-Star game in 2009. He did get some MVP consideration though.

T.R. compiled his list during the 2011 season. I would respectfully submit that season to replace 2009 as Ian Kinsler's contribution to the list. Ian's defense was probably better in 2011 than in 2009. He made 620 trips to the plate and posted a similar .255 average and a higher .355 on-base percentage. He stole 30 bases, one less than 2009 but he got caught one less time. His 77 RBI were a significant drop. His 121 runs scored and 89 walks were significant improvements. The 34 doubles, four triples, and 32 home runs were a slight improvement over 2009. All those numbers came in 20 fewer plate appearances. I don't think Ian hit for the cycle in his second 30-30 season but, all things considered, I think 2011 was a better season than 2009. Once again Kinsler missed the All-Star game but did get some MVP consideration.
Posted by Spiff at 11:59 AM