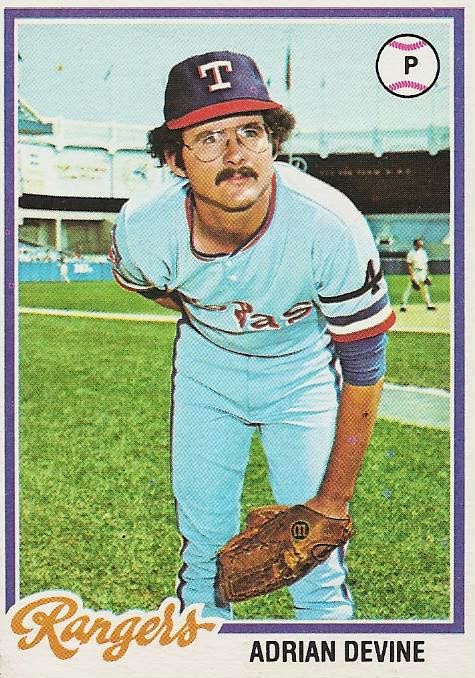 Adrian Devine, shown here on card 92 of the 1978 Topps set, had an unusual career. He played for just two teams. That's not altogether odd but the fact that he did two stints with each team catches the eye.

Adrian started his career with the Atlanta Braves and broke into the Majors with them in 1973. He was up and down from the minors in 1974 and 1975 but did see decent action in 1976. On December 9, 1976 the Braves sent Adrian to the Rangers as part of a package of players given for Jeff Burroughs.

Devine spent the 1977 season with Texas and pitched acceptably for them during their unsuccessful run for the pennant. In 105.2 innings over the course of 52 games Adrian compiled a 3.58 ERA and an 1.259 WHIP. Not too bad but not enough to keep him off the bargaining table as the Rangers attempted to improve enough to make the final hurdle to the post-season.

Devine's 1977 performance must have convinced the Braves they missed him. On December 8, 1977 he made the trip back to Atlanta in the four team trade that brought Nelson Norman, Al Oliver, and Jon Matlack to Texas. Just two years later Adrian found himself headed back to Texas. That trade, and his second stint with the Rangers, will have to wait for his 1981 Topps card.
Posted by Spiff at 11:30 AM

A Galveston BOI (Born On Island)