More fun with the DL. 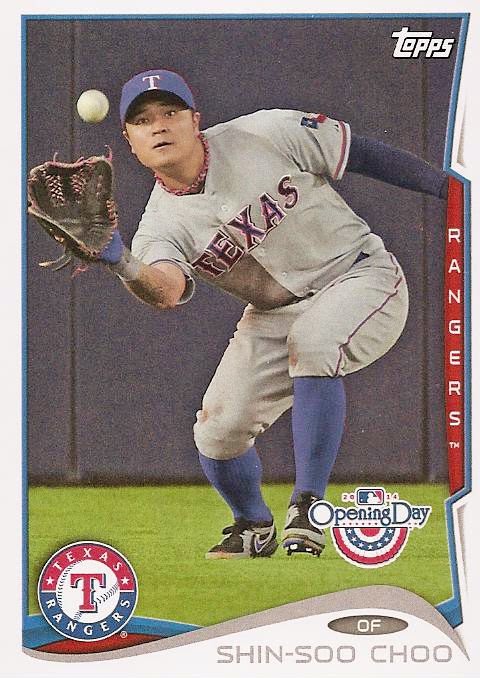 The injury parade continues for the Texas Rangers. Seems like management has gotten to the point they are being extremely cautious with injured, or possibly injured, players. That's not always a bad plan, especially during a season like this one.

Prior to last night's game in Seattle the Rangers put outfielder Shin-Soo Choo, shown here on card 120 of the 2014 Topps Opening Day set, on the Disabled List. Choo has been a bit of a disappointment this season. Perhaps the reasons have to do with his ankle injury and left elbow bone spurs. The ankle needs rest and the elbow needs surgery. Choo will likely undergo the surgery on Friday and the recovery time will give his ankle plenty of rest. Needless to say, his 2014 season is over. Michael Choice was recalled from Triple A Round Rock to fill the gap.

There's also doubt that ace Yu Darvish will pitch again this season. Yu's currently on the DL with elbow inflammation. If the Rangers were in contention he would likely still be pitching. They aren't though so he's not. It seems the club would rather Darvish get good and healthy going into 2015 than rush a 2014 return. Time is running out for a Darvish return this season.

On the other hand, Derek Holland is likely to make a return this year. Dutch has been on the Disabled List all season but is nearing the end of his minor league rehab assignment. Barring a setback he could be returning to the mound for Texas any day now. That would be good because it would give him at least some Big League experience this year.

One bright spot yesterday was the Rangers beating the Mariners 2-0. The win gave Texas their 16th shutout of the season. Not too bad since the team ERA is 4.71. Guess that means when they're on they're on and when they're not they're not.
Posted by Spiff at 11:33 AM