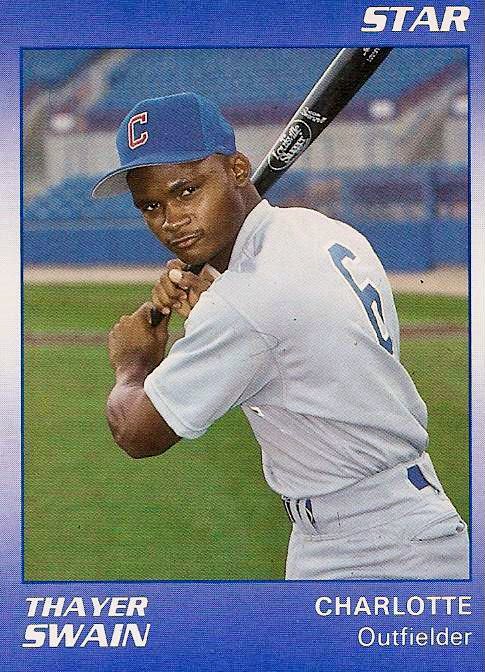 Thayer Swain, shown here on card #30 of the 1990 Charlotte Rangers set, is a bit of a mystery. He was initially drafted by the San Franciso Giants in the third round of the 1986 draft. He didn't sign and stayed another year at San Jacinto College in Pasadena, Texas. Not sure if that was to try to improve his draft ranking or to work on his degree. Hopefully it was to work on his degree.

The Rangers snagged Swain in the 33rd round of the 1987 draft. Perhaps his signability issues with the Giants dropped him lower in the draft. Instead of starting his pro career right away as usual, Swain played the 1988 season with the San Jacinto Gators. I'm not sure if he delayed his entrance into pro ball due to academics or sports. Thayer was one of the best position players to come through the school and still holds the single season records in hits and on-base percentage. He's in the top five for home runs, runs scored and batting average.

Kicking off his pro career, Swain started in Rookie Ball with the Butte Copper Kings in 1988. He did well there and earned a promotion to Single A Gastonia for the 1989 season. A promotion to A+ Charlotte for the 1990 campaign followed.

In 105 games for Charlotte, Thayer made 375 trips to the plate. He posted a .245 and a .331 on-base percentage for the season. Both were significant drops from his tour with Gastonia but he also played in 45 more games and was making the adjustment to a longer season as well as to better pitching.

Swain committed just two errors in 204 chances in the outfield for a .990 fielding percentage.

It appeared Thayer Swain had some potential. His defense was pretty solid and he had a foundation to build on offensively. A little more power would be nice (he hit no home runs in 1990) but it looks like he might have been able to adjust and continue to develop. That's what makes the end of his pro career after the 1990 season a complete mystery. Barring a major injury, I can see no reason why he would have hung up the spikes at 23 years of age and still on his way up. He did though and that was the end of the line.
Posted by Spiff at 1:42 PM