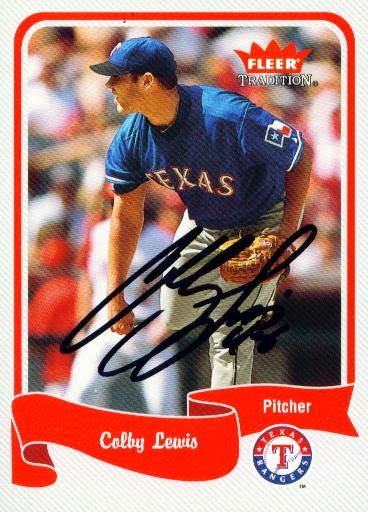 Colby Lewis, shown here on a signed 2004 Fleer Tradition card, started a rare rubber game against the Seattle Mariners yesterday. It's not been often this season that the Rangers have been set to leave an opposing city with a series tied. To be honest, I didn't figure they really stood a chance of winning yesterday. Most of the starting lineup are unknowns and Adrian Beltre is a big stick standing alone. I probably wasn't the only one wondering where the offense for a possible win would come from.

To my utter shock, the Rangers trounced Seattle 12-4. Lewis turned in a complete game and every player in the lineup scored at least once. Only Michael Choice didn't get a hit. Rougned Odor and Leonys Martin both went deep. Odor's shot was a grand slam. That makes him the youngest player in Rangers history to hit a grand slam.

Nice to see the offense finally show up and Colby get his second complete game. The series win on the road is a bright spot amid this dim season as well. The Rangers record now stands at 52-80 and their magic number at 11. No, they won't be going to the playoffs but if they want to avoid 100 losses this season they have to win 11 more games.
Posted by Spiff at 10:12 PM