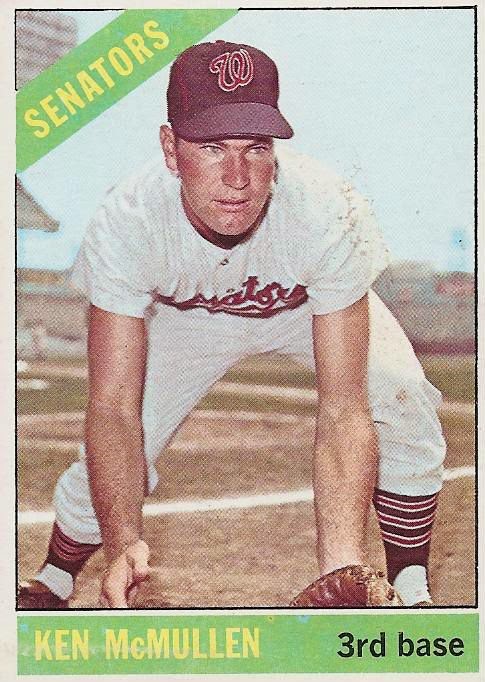 In 1966 Ken McMullen, shown here on card 401 of the 1966 Topps set, was coming into his second season with the Washington Senators. His first season, in 1965, had been a success. He was second on the team in home runs with 24 and also knocked in 84 runs that year. For the offense starved Senators it was like a sudden flood with Ken and Frank Howard arriving in the same trade. McMullen also took over at third for Washington and promised to be an answer to the long search for a good third sacker.

Things continued well in 1966 at third for Ken. He played eight innings in right field and 61 innings at first base but the vast majority of his playing time was at third base. Over the 1167.1 innings he played there he posted a .951 fielding percentage. That was three points under the league average but McMullen was well over the league average in range. Some of the errors he committed might have been on balls other third basemen would have not tried to get.

At the plate Ken had a down year. He made 582 plate appearances, second only to Ed Brinkman over at shortstop. McMullen managed a .233 batting average and a .289 on-base percentage. Neither were pretty numbers and his power dipped as well. He watched his home runs drop to 13 (still tied for third best on the club) and his triples to four. He managed one more double with 19 but that didn't keep his slugging percentage from tumbling. It did tie him with Frank Howard for the most doubles on the team in 1966.

The Senators had confidence in Ken McMullen. In spite of his struggles at the plate they kept running him out there. He played in 147 games for the club in 1966, second only to Ed Brinkman's 158. The fact that the club carried no other third baseman on the roster that season clearly indicated they considered Ken to be the solution at third. If he could get his offensive numbers up and maintain the defense it looked like Washington fans would be seeing a lot of Ken McMullen at third base in 1967 and beyond.
Posted by Spiff at 11:57 AM