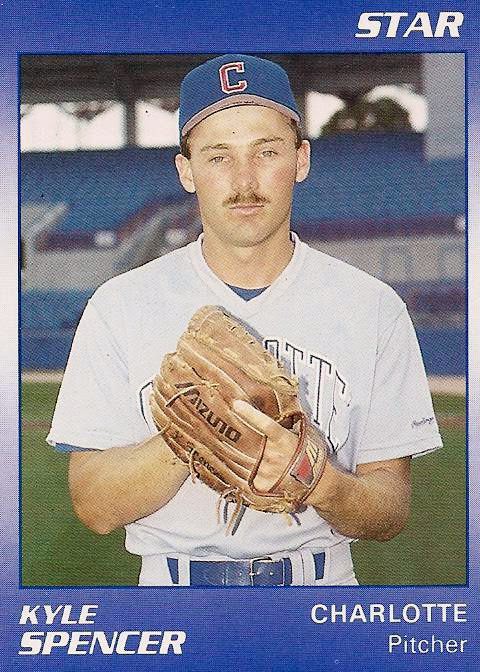 Kyle Spencer, shown here on card 27 of the 1990 Star Charlotte Rangers team set, was the 26th round draft pick for Texas in the 1988 draft. After two seasons Kyle had worked his way up through Rookie and Single A ball. He would spend the 1990 season at A+ ball with the Charlotte Rangers.

Working strictly out of the bullpen, Spencer tossed 83 innings in 43 appearances for Charlotte. He posted an impressive 1.63 ERA but his WHIP rose from the previous season to 1.229. The rise Kyle's WHIP could be attributed to the better batting eyes of the A+ batters. He managed to drop his hits per nine innings by over a hit a game but his walks rose by 17 to 52 total even though he pitched two fewer innings than the year previous. Batters were also striking out less. Spencer's 78 whiffs reflected a drop of 27 from the year before.

All in all 1990 was a mixed year for Kyle Spencer. On the surface he appeared to have made the adjustment to A+ ball well. His 8-2 record, lowered ERA, and fewer hits allowed looked good at first glance. A little digging showed some reasons for concern though with his rising WHIP, more walks, and fewer strikeouts. The Rangers did the digging and decided to take a wait and see approach with Kyle. He was assigned to stay with Charlotte for the start of the 1991 season.
Posted by Spiff at 12:17 PM