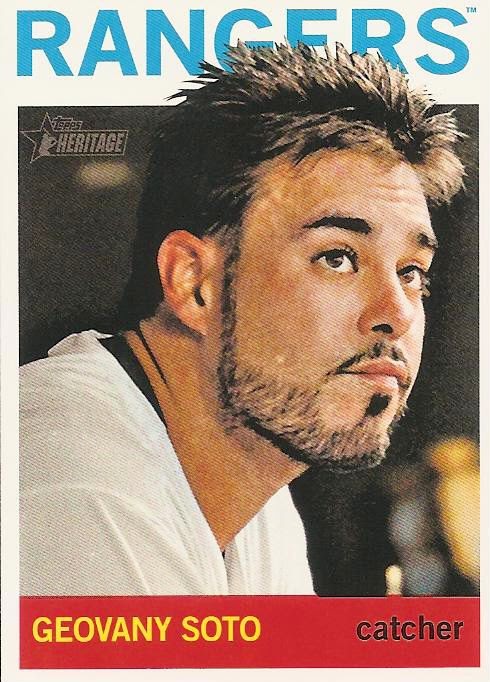 With the Rangers ship hard on the rocks this season, Jon Daniels has done surprisingly little load lightening. Aside from the Soria trade, he has stood pat for the most part. Seems JD believes the team will be able to turn things around next year and will need the pieces already in place. Over the past two days he has made a couple of moves though.

On the 23rd Texas sent catcher Chris Gimenez to the Cleveland Indians for future considerations. These kind of deals have always made me wonder, just how do the involved teams decide what is the future considerations? Seems an awful lot like selling somebody a car and agreeing to decide on the price later. I'm guessing there's more to it than that but I don't understand all the fine details. Gimenez did a stint with the Rangers earlier this season but was playing with Triple A Round Rock when he got traded.

Yesterday, during the team's 3-1 win over the first place Kansas City Royals, the club announced another deal. Geovany Soto, shown here on card 241 of the 2013 Topps Heritage set, went to the Oakland A's for a reported $1000,000 in cash considerations. Normally you wouldn't expect to see a player with the potential for any impact dealt within the same division. That means one of two things, either Jon Daniels doesn't think Soto will have any impact or he doesn't figure the A's will hang on to him after this season. It's unlikely Daniels is completely discounting Soto. What seems more apparent is that Oakland will not have Geo in 2015. He's a free agent at the end of this season and the A's have a poor record of late when it comes to re-signing free agents.

These two trades clear the way for the Rangers to work Robinson Chirinos behind the plate for the rest of the season and get a look at long-time farm hand Tomas Telis to see what he can do at the Major League level. The team called Telis up from Triple A to replace Soto on the roster. That move opens up a promotion opportunity for top catching prospect Jorge Alfaro. He may get some time at Round Rock this year. Between Chirinos, Telis, and Alfaro the Rangers will have some tough decisions behind the plate in the next year or so.
Posted by Spiff at 10:41 AM