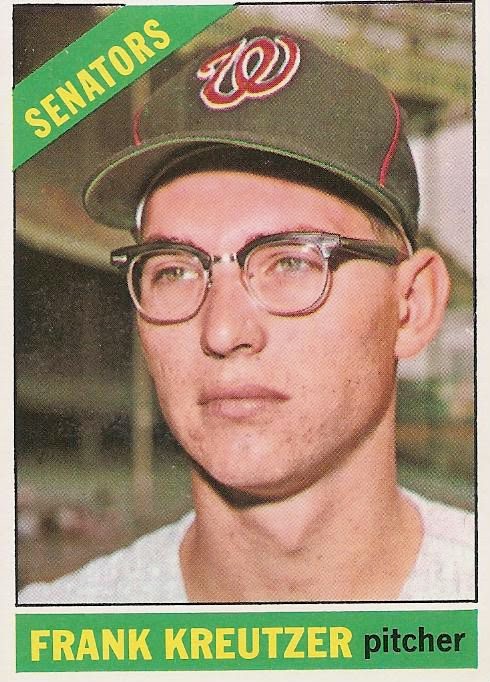 Frank Kreutzer, shown here on card 211 of the 1966 Topps set, was reaching the end of his chances with the Washington Senators in 1966. Left-handers have a longer shelf life than right-handers but the Senators hadn't been impressed by what they saw from Frank in 1964 and 1965.

Frank just hadn't been able to get his ERA under 4.30 or his WHIP under 1.450. He needed to show some serious improvement in 1966 if he wanted to hang on with the club.

Making six starts in the nine games he appeared in, Kreutzer pitched 31.1 innings with the club in 1966. He managed to drop his WHIP to 1.277 but his ERA climbed to a career high 6.03. The problem was Frank's propensity to cough up the gopher ball. He allowed nine in the small sample, an average of 2.6 homers per nine innings. That was much higher than at any time previous in his career.

The Senators decided to hang on to Kreutzer but he obviously needed work. Off to the triple A Hawaii Islanders he went. He would spend most of 1966 and all of the next two seasons there without showing any dramatic improvement. A four game stint in 1969 in which he got hammered was all Washington needed to see. On May 17, 1969 the Senators sent Frank to Pittsburgh in exchange for Jim Shellenback. Kreutzer spent the rest of the season at Triple A before pulling the plug on his playing days.
Posted by Spiff at 10:00 AM