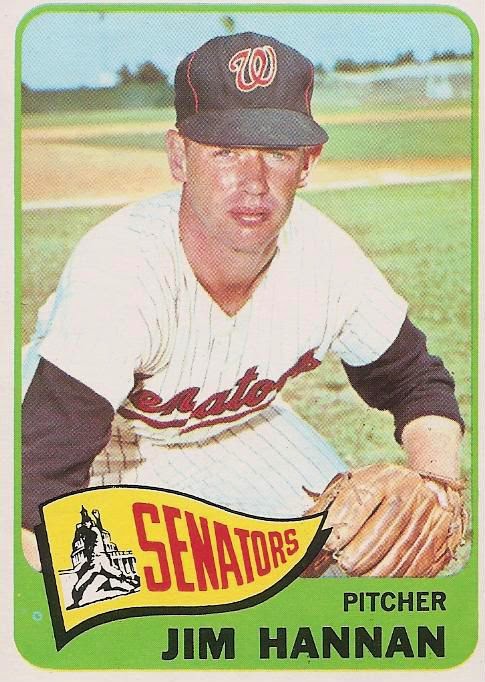 Jim Hannan was a yo-yo in the sixties with the Washington Senators. He broke into the Majors in 1962 with most of the season spent in Washington. Back to Triple A for most of the 1963 season. All of 1964 with the Senators.

Continuing the trend, Jim appeared in just four games with Washington in 1965 while spending most of the season at Triple A.

Primarily a reliever up to this time, Hannan made one start and three relief appearances for the Senators that season. Over the 14.2 innings he pitched he allowed eight earned runs for a 4.91 ERA. His 1.636 WHIP undoubtedly contributed to those numbers. Another troubling trend was Jim's propensity to walk opposing batters. He issued six free passes in his brief time with the Senators while striking out just five.

Most of 1965 Jim wore a Triple A Hawaii Islanders uniform. He made 30 appearances for the Islanders, all starts. Apparently the days of Jim Hannan the reliever were over. Jim pitched 210 innings for Hawaii and posted a respectable 3.26 ERA en route to a 12-7 season. His 1.300 WHIP was a bit high but he seemed to make progress in the walk area as he allowed 68 walks while striking out 134.

Jim Hannan seemed to have made the transition to starter. His next challenge was making the transition to Major League regular. 1966 was going to be an up year, the the trend held. Hannan needed to stay up after that though or he was in danger of developing a reputation as a Quad A player - good enough to get out of Triple A but not good enough to stick in The Majors.
Posted by Spiff at 10:01 AM