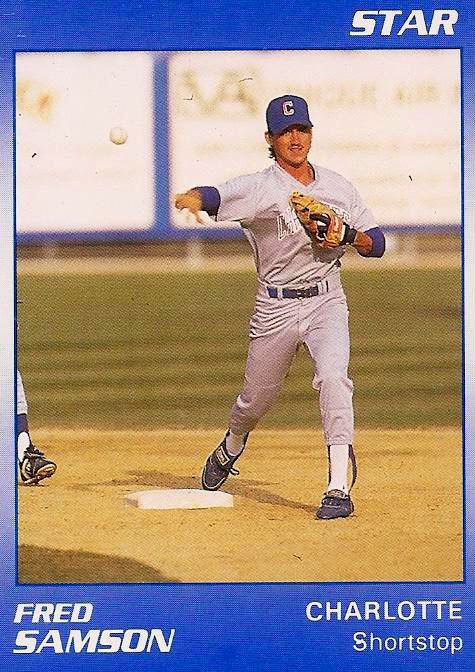 Fred Samson appears today on card 26 of the 1990 Star Charlotte Rangers team set. Looks like he's practicing the pivot on a double play.

The Rangers signed Samson as an undrafted free agent in July of 1986. By 1990 he had made his way up the chain to Single A Charlotte. In 1988 and 1989 Fred bounced back and forth between Charlotte and Double A Tulsa. For some reason he just couldn't get his bat going with the Drillers.

Samson spent the entire 1990 season with Charlotte. He played mostly third base (72 games) but did play some shortstop also (11 games).

Fred made 413 trips to the plate for Charlotte in 1990. He managed a .286 batting average and a .376 on-base percentage. The 51 walks he worked contributed to the difference between the batting average and on-base percentage. Samson wasn't a slugger but he did have a little bit of pop in his bat. He hit 21 doubles, one triple, and five home runs in the course of the season.

Overall Fred Samson managed to put together a decent year with Charlotte in 1990. Not quite as good as some years but good enough to buy him another look at Double A in 1991. Now he had to take advantage of the opportunity. His chances weren't unlimited and a third strike might just be the last.
Posted by Spiff at 8:12 AM