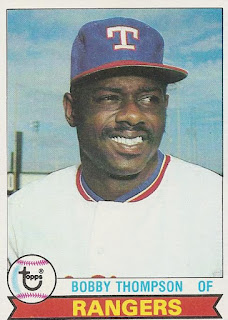 1979 Topps card number 336 is Bobby Thompson's only regular issue card. By the time it arrived in packs, Bobby's Major League career was over.

The Rangers drafted Thompson in the 19th round of the 1972 draft. He spent four years in Single A ball before beginning his ascent of the minor league ladder. By 1977 he was at Triple A. The Rangers must not have considered Thompson one of their best prospects since they lent him out to Cleveland and Atlanta so those teams could get a look at him in their farm systems. Neither club made the arrangement permanent and Thompson spent most of 1977 with the Triple A Tucson Torros. He batted .333 with the Torros and had on on-base percentage of .436. Those numbers were some of the best of his career and got him a shot at the Majors in 1978.

Bobby spent the entire 1978 season on the Rangers roster, serving as a backup outfielder to Juan Beniquez, Al Oliver, Richie Zisk, and Bobby Bonds. He appeared in 64 games and got 136 plate appearances. He was unable to replicate his Tucson numbers as his batting average reached just .225 and his on-base percentage .284. He hit three doubles, three triples, and two home runs. Disturbingly for a player with little power, he struck out 26 times while walking only nine times.  Thompson made 37 appearances in center field and nine each in left and right field.

Apparently unimpressed with Thompson's 1978 performance, the Rangers sold his contract to Seattle on December 6, 1978. He went to Spring Training with the Mariners but didn't make the team and they released him on March 28, 1979. He was able to catch on with the Maracaibo Petroleros de Zulia of the Inter-Amercan League for the 1979 season. In 1980 Bobby played for the Poza Rica Petroleros of the Mexican League. That would mark the end of his professional playing career.
Posted by Spiff at 3:11 PM

Hey George. Thanks for your comment. I doubt you would get much for this card in mint condition. If it is damaged you will probably be unable to move it by itself. Since I already have several copies I am not in the market. Thanks and good luck!