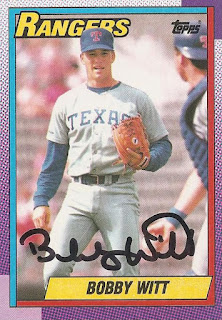 A couple of weeks ago I posted I was getting back in the practice of requesting players' autographs through the mail. I sent out several batches of requests. Over the past several days a couple of them have returned with success.

Former Ranger outfielder George Wright returned two cards I sent him, both signed. That return came in on Monday. Two-time Ranger pitcher Bobby Witt also returned the two cards I sent him. Both this 1990 Topps and a second card were signed. Those cards arrived yesterday. Both Wright and Witt have signed for me in the past but it's always a thrill to open an envelope and see autographs inside. Many thanks to both gentlemen for their time in signing and returning the cards.

Looking forward to more returns in the coming days. I mixed things up a bit with the last batch of requests I sent out and added in some Senators along with past and current Rangers.. I usually don't have the extra cards to send to the guys who played in Washington but I did some checking and located a few. Decided I better send sooner rather than later since time is marching against them. Hope to see those cards, and some more Rangers, arriving home soon.
Posted by Spiff at 8:27 AM