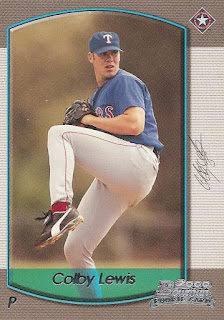 The Rangers were coming off a defeat last night as they faced off with the Tigers in Detroit. On Thursday night they got one-hit by Detroit starter Alfredo Simon. Last night the Tigers sent Justin Verlander to the hill to try for a second straight win.

Verlander did well, holding the Rangers to two runs (just one earned) on four hits over seven innings. The Tigers bullpen allowed just one hit and no runs over the remaining two innings.

Those two runs were all Colby Lewis, shown here on card 31 of the 2000 Bowman set, needed. Lewis has been a work horse for Texas this season and he didn't disappoint last night. Colby shut Detroit out as he scattered six hits over seven innings to out-duel Verlander. Keone Kela and Shawn Tolleson continued the shutout for the last two innings to ensure Lewis' 14th win of the season.

The win marks a career high for Colby and moves him into a three way tie for top in the American League this season. Nice to see things coming together for him after all he's been through since he was the prospect pictured on today's card. Extra nice to see his success coming in a Rangers uniform.
Posted by Spiff at 9:06 AM