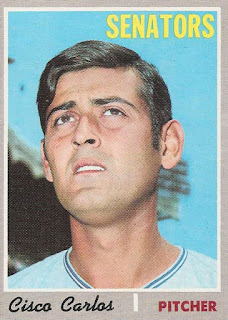 Francisco Manuel Carlos came to Washington in August of 1969 after the Senators purchased his contract from the White Sox. Not sure why he appears hatless in his ChiSox jersey on card 487 of the 1970 Topps set.

I'm also not exactly sure what was going on with Carlos in 1970 but he spent most of the season with the Triple A Denver Bears after spending all of 1968 and most of 1969 in the Majors. Primarily a starter, he made 28 starts in 32 appearances and pitched 204 innings for the Bears. Cisco put together a decent 3.40 ERA and a 1.343 WHIP en route to a 13-9 record. He also struck out 103 opposing batsmen while issuing just 62 free passes.

With decent pitching numbers, it's not surprising that Carlos spent some time with the Senators. A little time. Just a cup of coffee really. He appeared in five games, all in relief. Over six innings he posted an 1.50 ERA and an 1.167 WHIP. He did walk four while striking out just two.

Even with his limited time with Washington in 1970, one would expect to see Carlos get another shot in the Majors. It didn't happen though and he never appeared in another Major League game. He would play in the Senators/Rangers farm system through the end of 1972 and then in the Houston system in 1973 before hanging up the spikes for good.
Posted by Spiff at 7:50 AM