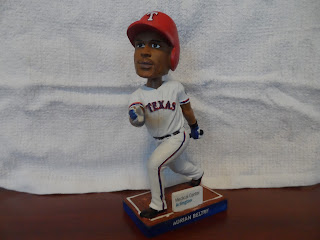 Made it out to the Rangers game yesterday. Got in line early enough to get the Adrian Beltre bobble head giveaway you see here. Also had time to stroll around the park and enjoy the atmosphere a bit before the game.

Sat in section 331 this time. I am getting to where I really enjoy the third deck along the baselines. Great view of the game and park, some shade, and a nice breeze most of the time.

Coming into the game yesterday the Rangers were leading the series with the Rays 2-0 and looking for the sweep. I have little confidence in Texas starter Yovanni Gallardo and my fears seemed to be borne out when the Rays struck first with a run in the first inning. It would have been more but Delino DeShields made a great diving catch in left center field to rob Asdrubal Cabrera of at least one, maybe two, RBI. Texas struck back in the bottom of the first with two runs on one hit. DeShields was in on the action again with a walk, stolen base, and run scored.

Gallardo gave up a lead-off triple to Desmond Jennings to start the second inning and Kevin Kiermaier knocked a double in the next at-bat to even the score. John Jaso came up next and singled to give the Rays a 3-2 lead. You can bet I was not saying pleasant things about Gallardo. Elvis Andrus led off the bottom of the second with a single but got knocked off at second on a Bobby Wilson fielder's choice to short. Recent call-up Ryan Strausborger rapped a two out single to move Wilson to second. That turned the lineup over and brought up DeShields again. He singled to bring in Wilson and tie things up. Shin-Soo Choo struck out to leave the knot intact.

Gallardo settled down in the third and allowed no more runs for the rest of his time in the ballgame. He was lifted in the sixth for Sam Freeman. Freeman, Keone Kela, Sam Dyson, and Shawn Tolleson kept the Rays off the board for the rest of the game. Dyson was helped by an outstanding play by Beltre in the eighth to get Jennings on a shot to third.

Beltre hammered a solo shot in the third to put the Rangers up for good. Ryan Strausborger added insurance with a solo homer of his own in the fourth. That ended the scoring. Final, 5-3 Texas. Sweep! Great game and a great day at the park. Always good to see the guys win, especially when they pick up a spot in the Wild Card standings.
Posted by Spiff at 4:01 PM