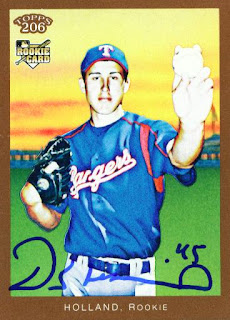 Yesterday marked Derek Holland's return to the Rangers rotation. He had been on the disabled list prior to then with only one inning under his belt this season.

Holland, shown here on a signed 2009 Topps 206 bronze card, made good on his return. He went 6.1 innings and gave up just two runs against Seattle. Derek struck out six and walked none. Not too shabby. Good enough to get him his first win of the season.

Coming to Dutch's support, the Rangers scored seven runs off Mariners pitching. The game was 3-2 until the seventh, when Texas scored four runs to salt it away. Most of the uprising in the seventh was back-to-back-to-back long balls by Mitch Moreland, Mike Napoli, and Elvis Andrus. Moreland's was a two-run shot so the home runs accounted for all the Ranger runs in that inning.

Nice to see the offense continuing the deliver. Going to need that if the team is looking to make a run at the post-season. Very nice to see Holland come back strong. He was lights out in his return last season but came back too late in the year to make any real impact. This year might be different. Dutch may have returned just in time to give Texas another big arm in the rotation when they really need it.
Posted by Spiff at 10:14 AM