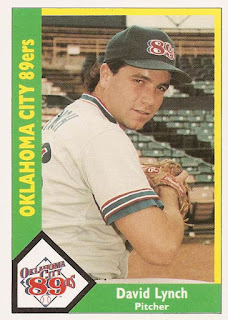 The Rangers drafted pitcher David Lynch in the 22nd round of the June, 1987 draft. He started his pro career the same year with the Gulf Coast Rangers in the Rookie League. By 1989 Lynch, shown here on card 154 of the 1990 CMC set, reached Double A Tulsa. He would split the 1989 season between Double and Triple A. That started a pattern that ran for several years.

David also split the 1990 season between the Double A Tulsa Drillers and the Triple A Oklahoma City 89ers. Since I don't know which stint came first I will start with his Double A performance.

Lynch appeared in 21 games for the Drillers, six of those appearances were starts. Over the 59 innings he pitched he put up a 3.81 ERA and a 1.373 WHIP. He struck out 37 opposing batters while issuing 21 unintentional free passes. Those numbers translated into a 4-4 record.

With Triple A OKC, David appeared 14 times and made two starts. He pitched 26.2 rough innings. Lynch posted a 5.74 ERA and a 1.800 WHIP. He allowed 14 free passes while whiffing just 20. Not surprisingly, he got four losses and zero wins.

Four years into his pro career David Lynch had made steady progress but was not blowing the doors off. The Rangers decided he was expendable. He was a left hander though and so likely to get more chances than the average 22nd round draft pick.