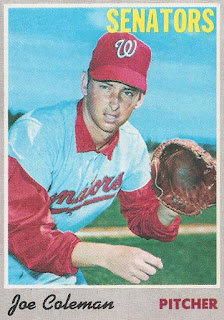 Joe Coleman's sporting the windbreaker under the jersey look on card 127 of the 1970 Topps set. He's also sporting an unusual look on his face. Is he disgusted with the pitch he just faked for the photographer or is he trying to look intimidating?

1970 was Coleman's fourth full season with the Senators and he came into the season looking to keep his spot in the starting rotation. For the most part he was successful in that endeavor.

Appearing in 39 games for Washington in 1970, Joe made 29 starts and pitched 218.2 innings (second most on the club). Coleman's 3.58 ERA was second best among regular Washington starters and but his 1.276 WHIP was a bit high. He whiffed a team best 152 opposing batters and walked 89 en route to a 8-12 record. One of those wins was a complete game shutout.

1970 was a mixed bag for Joe Coleman. He managed to keep his place in the Senators rotation and lower his WHIP a little. However, his ERA climbed and his number of strikeouts dropped. Coleman was a workhorse though and still had potential to build on.

Apparently the Detroit Tigers saw Joe's potential. They got him included in the disastrous Denny McLain trade in October of 1970 along with Jim Hannan, Ed Brinkman, and Aurelio Rodriguez. Washington got a washed up McLain along with Elliott Maddox, Norm McRae, and Don Wert. That trade helped keep the Tigers in contention and ensured the Senators would not be able to hang on in Washington.
Posted by Spiff at 8:46 AM